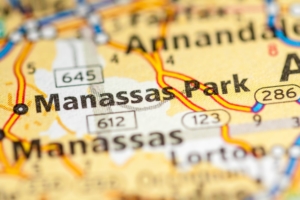 Manassas is a historic city in Virginia, located in Northern Virginia; as part of the Washington-Arlington-Alexandria metropolitan statistical area (MSA). It is perhaps most well-known for the First Battle of Manassas, which was the first major land battle of the American Civil War.

After the war, the town continued to grow and in 1975, it was eventually incorporated as an independent city in Virginia. Today, the population of the area is 41,501 which is based on the most recent available census data. The city is culturally diverse with a Hispanic population of nearly 21.4%, and a Black population of 15.7%.

The median household income for Manassas in 2010 was $70,211, and currently 36% of residents have a college education. Unemployment levels are low, with the 2010 rate of 6.3% being well below the national average.

Approximately 89% of people who work in Manassas commute in; with only 11% of individuals who both live and work in the city of Manassas. Medical services and technology are the primary economic drivers of Manassas. In addition to those that commute into the city (around 13,666), about as many people commute out of the city for work (around 13,000).

One of the largest employers in the city is Micron Technologies, a leading semi-conductor producer which employs more than 1,650 people. Lockheed Martin, located in Manassas employs around 1,500 people; and the Manassas location of the Novant Prince William Health System employs about 1,400 people.

Major roads near the city include I-66, U.S. Route 29, and Virginia State Route 234 Business, which allows for easy commuting around the MSA, to Washington D.C., Arlington, and elsewhere. The nearest airport is the Manassas Regional Airport, and the nearest major airport is Washington Dulles International Airport.  Washington IAD is located in right outside of D.C., and is about18 miles from the center of Manassas.

Rail transit is also available in Manassas. The routes to and from Manassas are owned by Norfolk Southern. Both Amtrak and the Virginia Railroad Express (VRE) provide commuter transportation to Alexandria, Washington D.C, and extends even as far away as Chicago and Boston. There are three Amtrak routes that serve the city, while the VRE has two stops in the area.  These two stops include one in Downtown Manassas and one by that is located by the Manassas Regional Airport.

In regards to area schools, the City of Manassas is served by Manassas City Public Schools. There is a total of five elementary schools, two intermediate schools, one middle school and one high school in the area.

There are also a number of private schools found throughout the City of Manassas such as Seton School, and the All Saints Catholic School. Higher Education Institutions with a presence close to city limits include George Mason University, Northern Virginia Community College, and Strayer University; just to name a few.

For more information about living in Manassas, you can consult the following resources:

Schedule a Home Inspection in Leesburg
Scroll to top